The Blocklist creation dialog will now offer the admins to classify the rule as detecting phishing or spam.

Until now, all the emails that were blocked based on blocklist rules were classified as 'phishing'. This behavior was misleading, as spam emails were misclassified, and diverted the numbers in the reports and dashboards. These emails were also processed by the phishing workflow, and sent unwanted email notifications.

With the new selection, when the admins create a blocklist rule they can now classify rules that are meant to block spam emails as such. These emails will be marked as spam, processed by the spam workflow, and counted as spam. 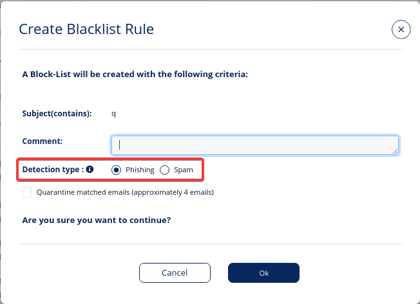